Celts to the Creche: St. Cuthbert 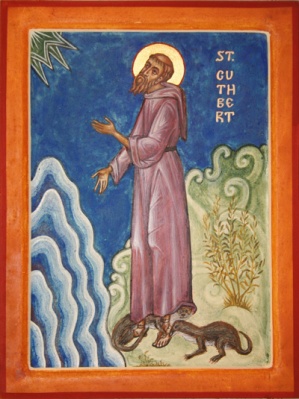 St. Cuthbert by Aidan Hart. It is said that Cuthbert stood in the icey waters to pray for hours on end and that otters licked his feet dry when he came back on land.

Celts to the Creche: Day 6

On this 6th day of our Advent journey with the Celts to the Creche, we join St. Cuthbert on this pilgrimage. Cuthbert was a 7th c. Bishop of Lindisfarne who is the patron saint of Northern England. He was known for his gentle strength, wisdom, skillful speaking, prayerful life, and devotion to Christ. 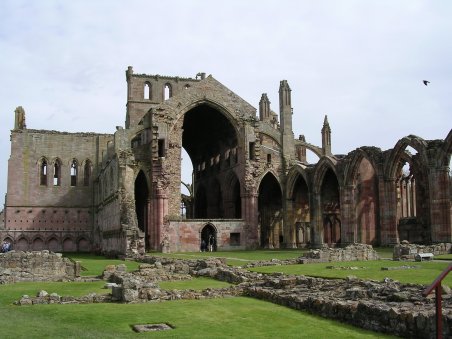 Ruins of Melrose Abbey in Scotland. photo from wikipedia

Early Life: Cuthbert grew up in southern Scotland, near Melrose Abbey.  It is said that on the night that St. Aidan (day 1 of Celts to the Creche) of Lindisfarne died, that he saw a vision of Aidan’s body being carried to heaven which led him to sense a call to become a monk.

His calling: Soon after that vision, Cuthbert became  a monk and entered Melrose Abbey under the direction of its prior Boisil whom Cuthbert admired.1 In the late 650’s, he and his Abbot Eata transferred to Ripon Abbey and they then returned to Melrose where Boisil died of the plague about 664.  About 665-700 Cuthbert went to Lindisfarne as abbot.

A view of the ruins of the abbey at Lindisfarne. Visited in 2007

After the Synod of Whitby in 664 AD, Cuthbert helped transition Lindisfarne from the Celtic to the Roman way.  While serving as Abbot, he would often sense the need for solitude to renew his spirit and would take a little boat several miles away to one of the isolated Farne islands. It is interesting that he would not visit with anyone who came to see him while there.

He might open the window to speak with someone who showed up, but when the Abbess of Whitby, Ælfflæda (who was the second abbess of Whitby and succeeded Abbess Hilda) wanted to meet with Cuthbert, he left his little cell and met her at the Isle of Coquet.

Bishop of Lindisfarne: Cuthbert retired in 676 to permanently live on the Isle of Farne as a hermit.

He was called (begged!) out of retirement by King Ecgfrith and a band of other leaders to become the Bishop of Lindisfarne. He reluctantly accepted this call and was ordained by Archbishop Theodore and six bishops at York on Easter Sunday, March 26, 685, but less than two years later at Christmas he decided he had enough of a good time and moved back to his little hermitage on the Inner Farne.

Place of Resurrection: Cuthbert predicted his own death and he died on the Inner Farne on March 20, 687. He was buried at Lindisfarne, but to protect his remains from the Viking onslaught to the area in the mid-800’s, his sarcophagus was carried by the monks of Lindisfarne throughout Northumbria.

His body rested at the church of St. Mary and St. Cuthbert at Chester-le-Street for a long while, but Cuthbert’s final resting place was Durham Cathedral, where his body still remains. His burial is intriguing. It is said that when his sarcophagus was opened eleven years after he died that his body was incorrupt. He looked like he was asleep and his limbs were still flexible. His vestments still looked new.

St. Cuthbert’s body found to be incorrupt when his tomb was opened. Illustration from British Library MS Yates Thompson 26, a manuscript of Bede’s prose life of Cuthbert, written c. 721, copied at the priory of Durham Cathedral in the last quarter of the 12th century. The 46 full page miniatures include many miracles associated with Cuthbert both before and after his death. from Wikipedia

In 1104, Cuthbert’s tomb was opened once again and a small book of the Gospel of John, measuring only three-and-a-half by five inches, now known as the St. Cuthbert Gospel, was incredibly found! Even the original  goat leather Celtic design red bookbinding was still intact.

Also found in his casket was a set of  early 10th century  vestments  placed by King Æthlestan while on a pilgrimage to Cuthbert’s shrine at Chester-le-Street. These vestments were made of Byzantine silk with a stole decorated with Anglo-Saxon embroidery. Also, in his coffin, a stunning gold, garnet, and shell pectoral cross was found on his body. In addition, Cuthbert’s personal portable altar table covered in silver was discovered in his coffin. It is recorded that also a comb, scissors, and a chalice made of onyx with a gold lion was in the coffin. 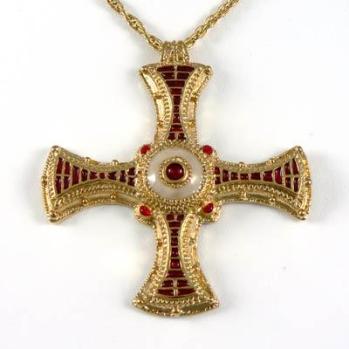 St. Cuthbert’s mid 7th c. pectoral cross found on his incorrupt body. It had likely been handed down to him.

Cuthbert’s  very simple wooden coffin  carved with primitive looking angels along with some of the coffin relics can be viewed in the Open Treasures area of  Durham Cathedral. It is recorded that at the Dissolution of the Monasteries that Durham Priory was dissolved about 1539/1540 and the gold, silver, and gemstone shrine of Cuthbert in the Cathedral was torn asunder by a goldsmith and others sent by Henry VIII. One cannot help but wonder if Cuthbert was  relieved that his ostentatious shrine was now more fitting for him.

We know of St. Cuthbert through The Venerable Bede’s Life and Miracles of St. Cuthbert of Lindisfarne written in verse after 705 which he later revised and a prose life between 710 and 720AD.3 Bede’s works on Cuthbert were likely composed based upon an original  Life of Cuthbert by an anonymous monk at Lindisfarne that Abbot Eadfrith commissioned in honor of Cuthbert’s life. 4 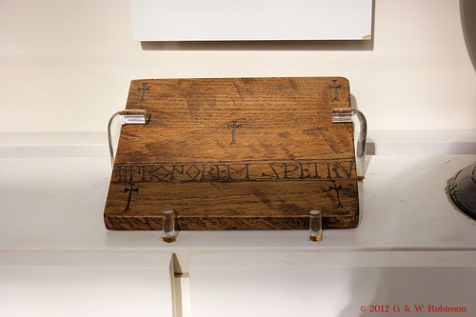 A reproduction of St. Cuthbert’s portable altar table that was buried with him. photo from W & G Robinson

Gospel of Matthew page from the Lindisfarne Gospels. British Library.

Still popular in the 20th and 21st Centuries: In 1987, on the anniversary of Cuthbert’s Resurrection Day in 687 the magnificent early 8th century Anglo-Saxon illuminated  Lindisfarne Gospels was displayed in Durham Cathedral. This sacred gospel book was most poignantly laid upon Cuthbert’s shrine for a short while.5

In 2013, Durham Cathedral once again hosted the Lindisfarne Gospels on loan from the British Library and of course the much loved St. Cuthbert was at the forefront of these  festivities.

St. Cuthbert’s Way, a beautiful 62 mile hike from Melrose Abbey in Southern Scotland to Lindisfarne Island is a popular walking path through the hilly terrain of the Scottish borders.

Pilgrims from all over the world flock to Durham Cathedral, Lindisfarne, and Melrose Abbey to be in the presence of the places of St. Cuthbert, this gentle wise Celtic Bishop who still touches lives 1300 years later.

In June 2017, archaeologists digging on a rocky promontory on Lindisfarne discovered the ancient stone foundation likely resting on the original wooden foundation of either Aidan’s or Cuthbert’s church.

Stone foundation on earlier wooden church of either Aidan or Cuthbert found on Lindisfarne in June, 2017. 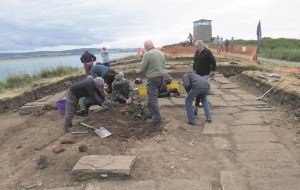 Archaeologists and volunteers working on the stone church foundation excavation on Lindisfarne, June 2017

Cuthbert might say to us this 6th day of  of  Celts to the Creche, in the midst of this overwhelmingly busy and sometimes crazy Advent season, seek some solitude. Perhaps find a sacred place that can be your personal “Isle of Farne.” Renew your spirit and remember why we are on a pilgrimage to the creche at Bethlehem.

Prayer: O Spirit of the Living God, remind me to rest, to find some sacred quiet in Your presence. Amen.

Bede. Ecclesiastical History of the English People. The Life and Miracles of St. Cuthbert of Lindisfarne.

Bonner, Stancliffe, and Rollason, David. St. Cuthbert, His Cult and His Community to 1200. Woodbridge,UK: The Boydell Press, 1989.

Breay, Claire and Bernard Meehan, eds. The St Cuthbert Gospel: Studies on the Insular Manuscript of the Gospel of John. British Library Publishing, 2015.

“Cuthbert” by Alan Thacker  and “Lindisfarne” by John Blair in Lapidge, Blair, Keynes, and Scragg.  The Blackwell Encyclopaedia of Anglo-Saxon England. Oxford:Blackwell, 1999.

Leyser, Henrietta.  Beda: A Journey Through the Seven Kingdoms in the Age of Bede. London: Head of Zeus, 2015.

Mitton, Michael. The Soul of Celtic Spirituality in the Lives of Its Saints. Mystic, CT: Twenty Third Publications, 1996.

St. Cuthbert’s Gospel has been digitized by the British Library.

Pastor Brenda is an ordained Christian Church (Disciples of Christ) minister. I am married with two grown awesome sons; and an equally awesome daughter-in-love; and two Maine Coon cats named for Celtic saints: “St. Fursey” and the paternal line of St. Columba, “Nialls.” Nialls is a gorgeous, huge, charming re-homed cat and he arrived with the name Niles. My pets must have Celtic/Anglo-Saxon names and since he seemed past the age to change his name...it became “Nialls.” My son asked me how to pronounce the cat’s new name and I said, “Niles.” As a former public and theological Library Director, I love doing research that has helped me in composing this Advent devotional. My research has been enriched by libraries, way too many books and journals purchased, and numerous pilgrimages to the places where these saints lived and worked and had their being. I cannot even begin to express what a great gift it has been to meet like-minded friends along the path who have generously and kindly shared their scholarship, knowledge, and enthusiasm for the Celtic and Anglo-Saxon saints. I often wonder if the saints have in some way been instrumental in introducing me to their friends on both sides of the thin veil. "Celts to the Creche" at www.saintsbridge.org. is one of my blogs. I have written of some of my pilgrimages and random musings at pastorpilgrim.wordpress.org. Some of my recent sermons can be found on YouTube under First Christian Church (Disciples of Christ), San Angelo, Texas.
View all posts by Pastor Brenda →
This entry was posted in Uncategorized and tagged Advent Devotional, Anglo Saxon Saints, Celtic Christianity, Celtic Saints, Celts to the Creche, Chester le Street, Durham Cathedral, Farne, Holy Island, Lindisfarne, Lindisfarne Gospels, Online Advent Devotional, St. Aefflaed of Whitby, St. Cuthbert, St. Cuthbert's Gospel, St. Mary and St. Cuthbert Church, Stonyhurst Gospel. Bookmark the permalink.

1 Response to Celts to the Creche: St. Cuthbert