Celts to the Creche: St. Bega of Bees

On this 26th day of our pilgrimage with the Celts to the Crèche we join with St. Bega of Bees on this pilgrimage to the manger in Bethlehem.

The legend of St. Bega of Bees opens with a princess in Ireland who is the daughter of a powerful king in Ireland. As a child, Bega was way beyond her years in spiritual maturity  being virtuous, intelligent, and desiring to serve God. On top of that she loved to do handicrafts! When she comes of age to be married, many suitors come to their abode hoping to gain her hand in marriage but she wants no part of any of them. She only desires to be betrothed to God. An angel is sent to Bega with an arm-ring with a cross etched on it that seals this divine betrothal between she and God.

The son of the King of Norway hears about her and sends an envoy to ask for her hand in marriage. We can only imagine that Bega’s father quickly agrees on this marriage proposal and hopes that this will afford his kingdom peace and fame for himself. A huge and lavish party is provided for the Irish and Viking guests who arrive for this important wedding.

Bega’s father must have recognized her reluctance to enter this marriage, so he locks all the doors in the palace and the strongest men of the area guard the entrances and exits. These most serious gatekeepers have daggers on their thighs, a spear in their hand, a double-edged ax over their shoulder.  Bega’s father was going to ensure that this royal marriage was going to happen!

While the wedding guests are wildly partying, Bega was furtively praying.  In response to her prayer, a voice tells her to run for it while everyone is drunk and that a boat is waiting at the shore for her.

Bega crosses the sea in this boat and lands at St. Bees in western England where she lived for several years in the thick forests of Cumbria as a hermitess. She performs at least nine miracles while living there. Overtime, she begins to fear pirates who are landing in the area, so she quickly flees the area leaving her sacred arm-band behind on purpose so that miracles can continue in this place that sheltered her.

You may desire to continue reading more about Bega or go on to the Meditation towards the end of this page.

Was Bega a Real Person or a Legend? Bega is somewhat of a mystery. We know about Bega from the Life of St. Bega that was part of a 13th century collection of English saints’ lives that was held at Holmcultram (Holme Cultram)Abbey in Cumbria. The Life of Bega continues with Bega fleeing the pirates to Northumbria where she founds Hartlepool Abbey and later becomes a nun at Hackness. The last part of Bega’s life story is likely not true, as the founder of Hartlepool in the 640’s was Hieu (see day 24 of Celts to the Crèche) and the Begu in the story of Hackness occurred in 680 AD at St. Hilda of Whitby’s (see day 2 of Celts to the Crèche ) death, not in the mid-800’s as the story of Bega likely happens.

Yet, I find it very interesting that Holmcultram Abbey in Cumbria would have a story like this in their collection, as this later founded Abbey was connected to the mother house of of the Celtic Whitby Abbey founded by St. Hilda. So, perhaps Holmcultram wanted to ensure this saintly connection with the famous Whitby Abbey and had Bega be the saintly emissary (whether real or imagined) between the Cumbrian abbey and the Northumbrian Whitby Abbey. Perhaps Holmcultram had a hagiographical Life of Bega commissioned that included a true story of a saint with some “extras” added to fit the need. I have never seen this theory in writing or heard it mentioned, it just sort of makes sense to me.

So, we do not know if Bega was a real person, a mixture of several saints, or if a cult grew up around her arm-ring that was still at St. Bee’s Priory as late as the 16th century. I tend to think that Bega was a real person who was sent to Cumbria from Ireland to begin an Irish style monastery that was well-loved in the northern part of England. She very well may have been of royal lineage as often those who began monasteries in the early medieval times were most often of noble heritage. But, I do not know how the arm-ring made it’s way from Ireland to St. Bee’s Priory!

St. Bee’s Priory: Today, one may visit the Norman church of St. Bee’s Priory on the Cumbrian coast. I visited there in 2012 and was touched by the beautiful early crosses in the graveyard and by the devotion to Bega for over 1,200 years, this one who reminds us to be have our heart set on God.

The town of St. Bees derives her name from Kirkeby Becok, meaning “church town of Bega.” 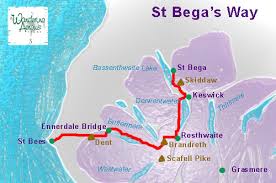 Bega’s Way: There is a St. Bega’s Way, a 36 mile walk through rural west Cumbria. This path connects St. Bees Priory, Ennerdale Bridge, Borrowdale, Derwentwater, and Lake Bassenthwaite. There is a  10th century St. Bee’s Church at Bassenthwaite that may have been built upon an earlier foundation.

St. Bega’s whole desire was to be betrothed to Christ, to be united to this one that she loved with all her heart. As a young virgin, her devotion to Christ demanded that she leave her family home in Ireland and sail across the Irish Sea to western England. That’s scary for a young woman, likely a teenager!

What is our devotion to Christ calling us to do? Do we need to leave behind some old habits, some old grudges, some old belief systems, some toxic people to discover a new way of thinking about our life in Christ?

Prayer: O Christ, may our hearts and our minds be like Bega’s centered upon You. As we are getting closer the conclusion of our pilgrimage to the Crèche, may we be ready to have you born again in our lives. Amen.

Rees, Elizabeth. An Essential Guide to Celtic Sites and Their Saints. New York: Burns and Oates, 2003.

Todd, John M. “The Pre-Conquest Church at St. Bees: a possible minster?” Transactions of the Cumberland and Westmorland Antiquarian and Archaeological Society (2003).

Rev. Warren is an ordained Christian Church (Disciples of Christ) retired minister. I am married to a wonderful guy with two grown awesome sons; an equally awesome daughter-in-love; an adorable grandson; and two very large, much-adored, dog-like Maine Coon cats. I love reading, writing, travel, mountains, and beachcombing. As a former public and theological Library Director, I love doing research that has helped me in composing this Advent devotional, “Celts to the Creche” at www.saintsbridge.org. My research has been enriched by libraries, way too many books and journals purchased, and numerous pilgrimages to the places where these saints lived and worked and had their being. I cannot even begin to express what a great gift it has been to meet like-minded friends along the path who have generously and kindly shared their scholarship, knowledge, and enthusiasm for the Celtic and Anglo-Saxon saints. I often wonder if the saints have in some way been instrumental in introducing me to their friends on both sides of the thin veil.
View all posts by Brenda →
This entry was posted in Uncategorized and tagged 40 day Celtic Advent devotional, Anglo Saxon Saints, arm-ring, Bega, Begu, Celtic Advent Devotional, Celtic Saints, Celts to the Creche, Cumbria, Hackness, Hartlepool, Holmcultram Abbey, Irish King, Online Advent Devotional, St. Bee's Priory, St. Bees, St. Bega. Bookmark the permalink.
Loading Comments...
%d bloggers like this: