Celts to the Creche: Brendan of Birr, Muirchu, and Moneisen of Britain

Macregol carpet page of the opening of the Gospel of Matthew. Produced at Birr Monastery. http://bodley30.bodley.ox.ac.uk:8180/luna/servlet/s/4go57p

Celts to the Crèche: Day 37

St. Brendan of Birr, Muirchú of Ireland, and

On this 37th day of our pilgrimage with the Celts to the Crèche, we are getting closer to the birth of Christ in Bethlehem. Today we journey with the following three lesser known Celtic saints of great faith and courage.

Muirchú was a 7th c. monk in Leinster that was a biographer of the great St. Patrick of Ireland.

Moneisen, was born about 400AD and was a Saxon. She was the daughter of a British king who persisted in her search for God until her parents brought her to Ireland to be baptized by St. Patrick. As soon as she met St. Patrick and was baptized and filled with the Holy Spirit, she immediately crossed over the threshold to the other side of the thin veil and was buried right there.

You may desire to continue reading more about Brendan of Birr, Muirchú, or Moneisen or  you can go directly to the  Meditation 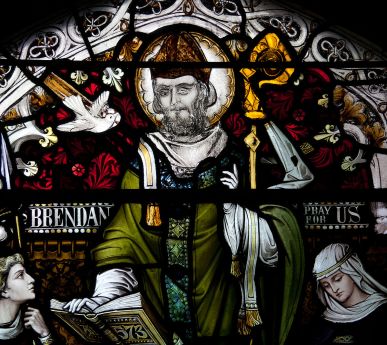 This Brendan was different than his friend, Brendan the Navigator (Brendan of Clonfert). Brendan of Birr studied with St. Finian at the famous Clonard Abbey.  Later, as the founder of the Birr Monastery, Brendan was also a friend and disciple of St. Columba. He represented him at the his trial at the Synod of Meltown in 561 AD concerning his  role in Battle of Cúl Dreimhne. Brendan’s defense of Columba resulted in his being exiled instead of excommunicated.  Brendan was one of the Twelve Apostles of Ireland.

Old Birr Churchyard where the Birr Monastery established by Brendan may have been. Photo from the Birr Historical Society.

Later, an important Synod was held at Birr in 697/8 AD, in which Adomnan succeeded in promoting a law protecting women, children, and the clergy from having to go to battle. In attendance at this Synod of Birr was the famous Adomnan, Abbot of Iona who wrote the biography of St. Columba. Bishop Coeddi of Iona was also a participant in this Synod along with numerous kings. Brendan died in 573AD and it is that St. Columba in a vision saw the soul of his friend Brendan of Birr being carried by angels to heaven. He said a special Mass of requiem for Brendan on the isle of Iona.

Brendan’s monastery later produced the McRegol Gospels.  McRegol, who was a  successor to St. Brendan, was a scribe, Abbot, and Bishop at Birr who died in 822 AD. According to a colophon on the final page of the gospel book, McRegol made a magnificent illuminated manuscript copy of the Four Gospels, the original of which is in the Bodleian Library, Oxford. On the final page of the book there is wording: Macregol dipinxit hoc evangelium. Quicumque legerit et intellegerit istam narrationem orat pro Macreguil scriptori.’ (Macregol illuminated/colored this gospel. Whoever reads and understands the story, pray[s] for Macregol the scribe.)

The deaths of the Abbots of Birr were recorded in the Irish Annals including McRegol listed as dying in 822AD.

Muirchú (“the Sea-Hound”) called himself Muirchú moccu Machthéni, that is, ‘Muirchú descendant of Machthéine’. He was a 7th c.monk in Leinster in eastern Ireland.  On the recommendation of Bishop Aedh of Slébte,  he recorded one of the first biographies of  the Irish St. Patrick entitled Vita sancti Patrici, ( The Life of Saint Patrick) and it became the basis for all the later Lives of Patrick.  He used Patrick’s Confessio and Epistola along with popular stories of his own time about Patrick. Muirchú then dedicated this book to the Bishop Aedh of Slebte,  who not only encouraged the Life of Patrick to be written, but he was also the patron for the work. Muirchú, along with Bishop Aedh, are both recorded as having been among the ecclesiastics who attended the Synod of Birr in 697 or 698 A.D. This “Life of Patrick” by Muirchú and another “Life of Patrick” by Tírechán are both included with a variety of other texts in the Book of Armagh.

Book of Armagh. Black tooled leather Book Bag with shoulder strap. This may not be the original book bag for the Book of Armagh as this bag could hold a larger book. Trinity College, Dublin. 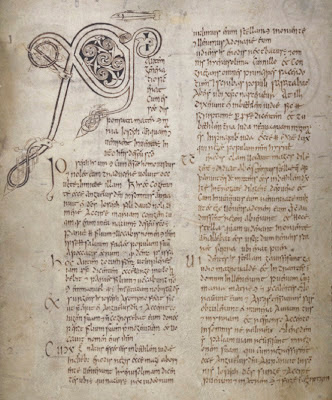 Page from 807AD copy of the  Book of Armagh (Liber Ardmachanus) that is at Trinity College Library, Dublin. photo from Wikipedia

St. Patrick of Ireland baptizing women.In Patrick’s Confession he wrote:But it is the women kept in slavery who suffer the most – and who keep their spirits up despite the menacing and terrorizing they must endure. The Lord gives grace to his many handmaids; and though they are forbidden to do so, they follow him with backbone.

This courageous young woman, Moneisen (Monesan), is only known to us by a chapter written about her in Muirchú’s Life of St. Patrick in the Book of Armagh. He entitled this Chapter 27: Of the Death of Moniesen, the Saxon Lady.

“Of the Death of Moniesen, the Saxon Lady“

And so I shall endeavor, if the Lord will, to narrate a few [more] of the many miracles performed by Patrick, bishop and eminent teacher of all Ireland.

Once upon a time, when all Britain was numb with the chill of unbelief, there was a noble daughter of a certain king, and her name was Moneisen [Monesan]; and she was filled with the grace of the Holy Spirit. When someone sought her in marriage, she did not consent; and, though bathed in tears, she could not be forced against her will to adopt what was the lower life. For she was wont — amidst blows and floods of tears — to ask her mother and her nurse to tell her who was the maker of the orb by which the whole world is lighted up; and she received an answer from which she ascertained that the maker of the sun is He whose seat is the heaven.

When she was constantly urged to join herself to a husband in the bond of matrimony, she used — illuminated by the brightest light of the Holy Spirit — to say, “I will on no account do this thing.” For she sought through nature the Maker of the whole creation; following in this respect the example of the patriarch Abraham.

Her parents, having taken advice given to them by God, heard of Patrick as a man who was visited by the everlasting God every seventh day; and they journeyed to Ireland with their daughter, looking for Patrick; and they found him after seeking for him with much toil. And he began to question them as if they were neophytes.

Then the travelers began to cry aloud and say, “We have had to come to thee, compelled on account of our daughter who is earnestly desirous to see God.” Then he, filled with the Holy Ghost, raised his voice and said to her, “Dost thou believe in God?” And she said, “I believe!” Then he washed her with the sacred laver of the Spirit and water. And almost immediately afterwards, falling on the ground, she yielded up her spirit into the hands of the angels. She was buried where she died.

Then Patrick prophesied that after twenty years her body would be reverently born from that spot to a church hard by. And this afterwards came to pass; the relics of this maiden from beyond the seas are venerated there to this very day.

St. Brendan of Birr is remembered as a Celtic saint who is considered to be the prophet of Ireland and one of the great Twelve Apostles of Ireland. Yet, most of us, like the faithful followers of Christ,  Moneisen and Muirchú will never experience sainthood, much less, be remembered by many except our family members and dearest friends. Yet, each of our lives is important.  We were conceived and born for a reason. We are God’s beloved children.

My congregations over the past several years have celebrated the birth of their fellow members and church guests at the first of each month. We speak of what a great blessing and gift they were to their families when they were born and that the universe needed them. The whole congregation then reads a special blessing to each celebrant. Along with the blessing, each birthday celebrant receives a tealight candle resting in a seashell. The candle reminds them that they were born to be light in this darkened world. The seashell reminds them of their second birth when they were born again through baptism into new life. We too like Moneisen receive baptism, not from St. Patrick, but from a local pastor, elder, or priest. This newly baptized one died right at Patrick’s feet and was buried there. Her life and light still shines over the hundreds of years and so will ours.

The Book of Armagh. Original book is digitized and the pages may be turned. http://www.confessio.ie

The Book of Armagh. Full-text. archives.org at Cornell University.

The Northumbrian Gloss of the Gospels. (information on the 10th c. Anglo-Saxon gloss addition to the MacRegol/Rushworth Gospels).

Pastor Brenda is an ordained Christian Church (Disciples of Christ) minister. I am married with two grown awesome sons; and an equally awesome daughter-in-love; and two Maine Coon cats named for Celtic saints: “St. Fursey” and the paternal line of St. Columba, “Nialls.” Nialls is a gorgeous, huge, charming re-homed cat and he arrived with the name Niles. My pets must have Celtic/Anglo-Saxon names and since he seemed past the age to change his name...it became “Nialls.” My son asked me how to pronounce the cat’s new name and I said, “Niles.” As a former public and theological Library Director, I love doing research that has helped me in composing this Advent devotional. My research has been enriched by libraries, way too many books and journals purchased, and numerous pilgrimages to the places where these saints lived and worked and had their being. I cannot even begin to express what a great gift it has been to meet like-minded friends along the path who have generously and kindly shared their scholarship, knowledge, and enthusiasm for the Celtic and Anglo-Saxon saints. I often wonder if the saints have in some way been instrumental in introducing me to their friends on both sides of the thin veil. "Celts to the Creche" at www.saintsbridge.org. is one of my blogs. I have written of some of my pilgrimages and random musings at pastorpilgrim.wordpress.org. Some of my recent sermons can be found on YouTube under First Christian Church (Disciples of Christ), San Angelo, Texas.
View all posts by Pastor Brenda →
This entry was posted in Uncategorized and tagged 40 day Celtic Advent devotional, Adomnan, Book of Armagh, Brendan of Birr, Celtic Advent Devotional, Celts to the Creche, Liber Ardmachanus, Life of St. Patrick, Macregol Gospels, Macregol of Birr, McRegol Gospels, Moneisen, Monesan, Muirchu, Online Advent Devotional, St. Columba of Iona, St. Patrick of Ireland, Synod of Birr. Bookmark the permalink.
%d bloggers like this: