Celts to the Creche: St. Non of Wales 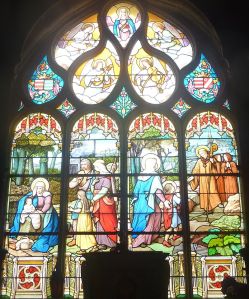 Stained Glass of St. Non and her son St. David of Wales in L’eglise Sainte Nonne in Dirinon, Brittany, France. photo from Wikipedia

Celts to the Creche: Day 5

St. Non, whose name means “nun” was the mother of the patron saint of Wales, St. David (Dewi Sant) who died about 589 AD.  She may have been a daughter  or granddaughter of Brychan, king of Brecon in South Wales.

Legend says that Non was a virgin and was raped by Sant, the King of Ceredigion. She became pregnant with David. Another story states that Non stopped into a local church to get a blessing for the upcoming birth. When the preacher found himself unable to preach in the presence of her unborn child, this was taken as a sign that the child would himself be a great preacher. 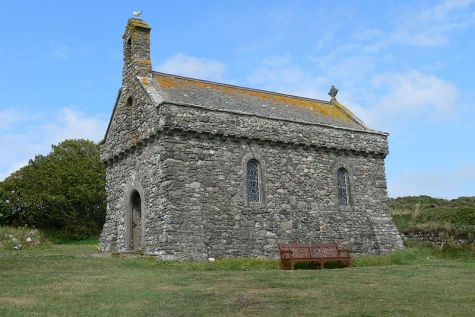 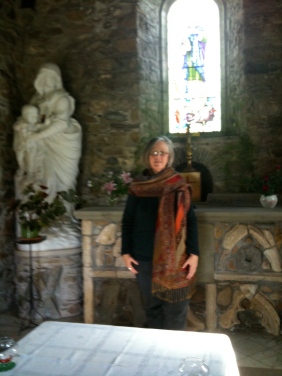 Chapel: Her chapel stands near the original Celtic foundations on a cliff top overlooking the gorgeous St. Non’s Bay, about a  mile south of St. David’s Cathedral in Pembrokeshire. The chapel along with St. Non’s Well is located on the Pembrokeshire Coastal Walk. 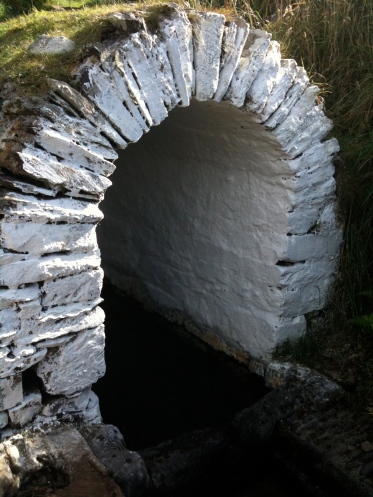 St. Non’s Well in Wales. I took this photo after I dipped my hands in the well in September 2009.

Holy Well: St. Non’s Holy Well is close to the chapel and it is considered to be one of the main healing wells in Wales as it is famous for curing eye diseases.

“There is a fine Well beside it (St. Non’s Chapel), cover’d with a Stone-Roof, and enclos’d within a Wall, with Benches to sit upon round the Well. Some old simple People go still to visit this Saint at some particular Times, especially upon St. Nun’s Day (March 2nd) which they kept holy, and offer Pins, Pebbles, Etc at this well”.

According to the St. Non’s Retreat Centre website: “Near the Chapel ruins is the Holy Well of St Non which tradition says sprang up at the birth of St David. It is regarded as one of the most sacred wells in Wales. The water is considered to having healing and miraculous powers. Even after the Reformation the well continued to be frequented by the faithful. It was fully restored and rededicated by the Passionist Fathers in 1951.At the same time a small shrine dedicated to the Virgin Mary was placed opposite the well.” 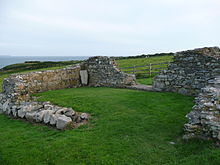 Original location of St. Non’s Chapel before it was dismantled by farmers. Very near to the 1934 St. Non’s Chapel. Photo taken in Sept.. 2009 when I visited this beautiful and serene place.

Non died in northwestern Brittany, France and is buried at Dirinon, ten miles east of Brest in Brittany. She is also commemorated as a holy woman not only in Wales, but also in Cornwall, England, and in Brittany. 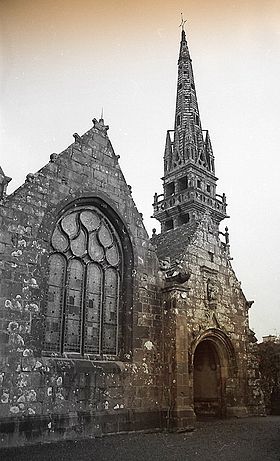 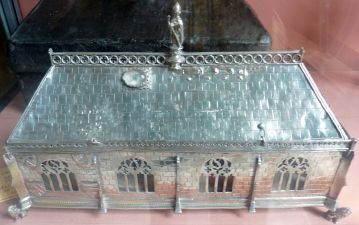 What a wonderful example Non’s life is of God turning something horrible in our life into something that blesses and transforms the world. As we journey with Non, a Welsh Celtic Saint to the Creche, let us take the truth deep into our souls that Christ can make all things new. That even the worst thing in our life can be transformed by the Creator Spirit into something beautiful and sacred and lovely.

Prayer: O Christ of the Universe, you know the deepest, darkest, most painful place of my soul. Shine the light of the Star of Bethlehem into that secret sanctuary that only You and I know about and may healing begin. Amen.

Williams, Peter. The Sacred Wells of Wales: A Tour. No publisher info. 2001.

Pastor Brenda is an ordained Christian Church (Disciples of Christ) minister. I am married with two grown awesome sons; and an equally awesome daughter-in-love; and two Maine Coon cats named for Celtic saints: “St. Fursey” and the paternal line of St. Columba, “Nialls.” Nialls is a gorgeous, huge, charming re-homed cat and he arrived with the name Niles. My pets must have Celtic/Anglo-Saxon names and since he seemed past the age to change his name...it became “Nialls.” My son asked me how to pronounce the cat’s new name and I said, “Niles.” As a former public and theological Library Director, I love doing research that has helped me in composing this Advent devotional. My research has been enriched by libraries, way too many books and journals purchased, and numerous pilgrimages to the places where these saints lived and worked and had their being. I cannot even begin to express what a great gift it has been to meet like-minded friends along the path who have generously and kindly shared their scholarship, knowledge, and enthusiasm for the Celtic and Anglo-Saxon saints. I often wonder if the saints have in some way been instrumental in introducing me to their friends on both sides of the thin veil. "Celts to the Creche" at www.saintsbridge.org. is one of my blogs. I have written of some of my pilgrimages and random musings at pastorpilgrim.wordpress.org. Some of my recent sermons can be found on YouTube under First Christian Church (Disciples of Christ), San Angelo, Texas.
View all posts by Pastor Brenda →
This entry was posted in Uncategorized and tagged 40 day Celtic Advent devotional, Advent Devotional, Brittany, Celtic Advent Devotional, Celtic Saints, Celts to the Creche, Dewi Sant, Dirinon, France, L'eglise Sainte Nonne, Mother of St. David of Wales, Online Advent Devotional, Sainte Nonne, St. David, St. David of Wales, St. Non, St. Non's Chapel, St. Non's Well, Welsh Saints. Bookmark the permalink.