Celts to the Creche: St. Brendan the Navigator

St. Brendan and his disciples letting the Spirit blow them to their place of resurrection. Icon writer unknown.

On this 20th day of our journey with the Celts to the Crèche, we encounter the Irish St. Brendan the Navigator, also known as St. Brendan of Clonfert who with numerous other Celtic saints, past and present that seem to be possessed with the DNA for wanderlust. It is recorded that he and his disciples would construct a coracle which is a boat with a basket-like frame of wood, covered with hides softened with butter, and covered in pitch. Then these voyagers would fast and pray, clamber into their little handmade boat with St. Brendan saying as they set sail: “Is not the Lord our captain and helmsman? Then leave it to Him to  direct us where He wills.” 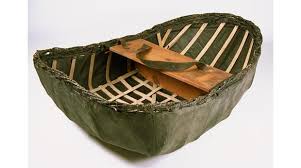 Coracle photo from the BBC-A History of the World  (it must have been a much larger coracle to carry Brendan and his disciples).

You may desire to continue reading more about  Brendan the Navigator or go on to the Meditation towards the end of this page.

Birth: Brendan was born about 484 AD to Christian parents, Findlug and Ciara in southwestern Ireland at Ciarraighe Luachra near Tralee. Before he was born, his mother had a vision that the child in her womb was filled with the Spirit. On the day of his birth, Bishop Erc, who was baptized by St. Patrick (see Day 40 of Celts to the Crèche), saw Brendan’s birthplace aglow with an angelic presence surrounding that place and immediately he went there to hold this very special baby. This little one was named “Mobi,” but when a fair drop fell from the heavens on him, his name was changed to Braenfiend (Brendan) meaning “fair drop or white mist.”

Education: Brendan was baptized by Bishop Erc (who saw Brendan’s birthplace aglow with an angelic presence)  near Tubrid at Ardfert and then given to Abbess Ita (see day 13 of Celts to the Crèche) of the convent of Kileedy in County Limerick to be trained and educated for about six years. Like the Druids, St. Ita taught in triads.

Brendan is believed to have asked Abbess Ita what three things God loved best and she answered:

1. “Faith in God with a pure heart

2. A simple life with a religious spirit

She also told him the three things God most detested were a scowling face, obstinacy in wrongdoing, and too great a confidence in the power of money.

St Ita’s well Tobar na Molt in Ardfert where St. Brendan may have been baptized by Bishop Erc (this is one of several wells that claims to be St. Ita’s well). photo from Megalithic Ireland

Brendan’s parents then gave him to the care of Bishop Erc to continue his education.  He later studied with the well-known teacher St. Enda at his monastery on the isle of Aran. Bishop Erc was a great mentor to him and taught Brendan Latin, Hebrew, and the Old and New Testaments. Brendan became one of the Twelve Apostles of Ireland who were pupils of Finnian of Clonard. It is even said that St. Patrick prophesied that St. Brendan would be a great Patriarch. St. Enda and St. Finnian are considered to be the founders of monasticism in Ireland, so Brendan studied with the best.

Journeys: Brendan had an urge within him, that Celtic need for travel and to explore, so Bishop Erc gave him permission to do so, but Brendan had to promise to return to Erc so that he could ordain him.

St. Brendan Voyage window at Feint Church in Tralee, Co.Kerry in Ireland. It was installed in November 2012. The window, which is over the main door was created by Artist/Sculptor Tighe O’Donoghue.

On that first journey, Brendan travelled to Skellig Michael, Aran, Strathclyde, Cumbria, and maybe even Wales.

St. Brendan’s Well on Valentia Island, near Skellig Michael. It is said that St. Brendan baptized two people there. It is poignant to see all the prayer gifts surrounding this well. It is not easy to get to this well, so we were surprised to see that so many people had pilgrimaged to this holy place. My husband and I visited the well in Sept. 2014. photo by Brenda Warren

Brendan then set up his famous monastery at Clonfert (meaning “meadow of the miracles”) in 559 in which it is said that at one time there were 3,000 monks there. He later founded other monasteries including Ardfert in Kerry, Inishdadroum in Clare, and Annaghdown in Galway where his sister Brig was the Abbess.

He yearned to find the Promised Land of the Saints, the Celtic Tir na nOg.  On his further travels, he visited St. Enda of Aran, who may have established the first Irish monastery on the isle of Innish. Brendan also visited St. Finnian of Clonard who is considered to be the founder of Irish of monasticism. Adomnan says that Brendan also visited St. Columba of Iona  (see day 3 of Celts to the Crèche.) on the island of Hinba. He also visited St. Malo who was a Welsh monk who had fled to Brittany and became the first bishop of Saint-Servan. Brendan also travelled to France and to the Orkney and Shetland Islands off the coast of Scotland, On his voyage to the Promised Land he encountered all kinds of interesting sea creatures and scary sea monsters. Brendan and his fellow voyagers celebrated Easter on what they thought was an island, but it was a whale!

They even came upon something they had never seen before, an iceberg. These Celts with a great love for God’s magnificent creation were so amazed by this gigantic ice island that they spent a whole day inspecting and measuring this phenomenon. Brendan declared, “let us inspect the wonders of God, our Maker.”

It was on this journey, that it is thought by some that Brendan and his crew even travelled to Iceland and North America, discovering it long  before the Vikings or Christopher Columbus.

Tim Severin’s coracle in which he sailed the Atlantic in the late 1970’s, from Ireland to North America. photo from  www.arcgis.com

In 1976-1977 in County Cork,  explorer and noted author Tim Severin  built a 36 ft., two masted, ash and oak, leather coracle made of 49 hides that he and is crew travelled the Atlantic from Ireland to the Hebrides, to Scotland, and then to Peckford Island, Newfoundland.https://player.vimeo.com/video/40225298

Journeys of Return and Resurrection: It is said that Brendan and his crew found the Promised Land, the island of Paradise, but were told not to stay there because they would only spoil it! Brendan returned to Limerick and visited his sister Abbess Brig at her monastery,  Annaghdown in Galway.

Annaghdown where Brendan’s sister, Brig was Abbess. Photo from Wikipedia.

In 578, after  almost 93 years of journeys, of founding monasteries, and of miraculous healings he knew it was time for him to cross over to the other side.  When he had received communion at Mass on Sunday he said, “God is calling me to the eternal kingdom. My body must be taken to Clonfert, for angels will be in attendance there and there is my place of resurrection. Make a small chariot, and let one of you go with it to convey my body.”  Then he blessed his sister Brig and all his followers. Upon reaching the threshold of the church  he said, “into your hands, O Lord.”  The next day, his monks did as he instructed, one brother accompanied his body to Conflert where he was buried with great honor and reverence.

Romanesque arch over doorway of 12th c.  St. Brendan’s Cathedral at Clonfert. Likely built over the place where Brendan was buried. photo from Megalithic Ireland

Much of what we know about Brendan is from a romance written about 780, The Voyage of St. Brendan and several lives of this saint written at various times during the medieval period.

O Lord,  like St. Brendan, I too want to climb into my little coracle and ask the Spirit to blow me to places I never dreamed or imagined! Blow Spirit Blow! Amen.

Baring-Gould, S. and John Fisher. The Lives of the British Saints; The Saints of Wales, Cornwall, and Such Irish Saints as Have Dedications in Britain, Part One. Kessinger Reprints.

Mitton, Michael. The Soul of Celtic Spirituality in the Lives of Its Saints. Mystic, CT: Twenty Third Publications, 1996.

Severin, Tim. The Brendan Voyage: Across the Atlantic in a Leather Boat. Dublin: Gill & Macmillan, 2005.

The Voyage of St. Brendan the Abbot.

Rev. Warren is an ordained Christian Church (Disciples of Christ) retired minister. I am married to a wonderful guy with two grown awesome sons; an equally awesome daughter-in-love; an adorable grandson; and two very large, much-adored, dog-like Maine Coon cats. I love reading, writing, travel, mountains, and beachcombing. As a former public and theological Library Director, I love doing research that has helped me in composing this Advent devotional, “Celts to the Creche” at www.saintsbridge.org. My research has been enriched by libraries, way too many books and journals purchased, and numerous pilgrimages to the places where these saints lived and worked and had their being. I cannot even begin to express what a great gift it has been to meet like-minded friends along the path who have generously and kindly shared their scholarship, knowledge, and enthusiasm for the Celtic and Anglo-Saxon saints. I often wonder if the saints have in some way been instrumental in introducing me to their friends on both sides of the thin veil.
View all posts by Brenda →
This entry was posted in Uncategorized and tagged 40 day Celtic Advent devotional, Annaghdown, Bishop Erc, Brendan, Brendan of Clonfert, Brendan the Navigator, Brendan Whale, Brig of Annaghdown, Clonfert, Finnian of Clonard, St. Brendan's Well, St. Brig of Annaghdown, St. Enda of Aran, St. Ita of Kileedy, Twelve Apostles of Ireland, Valentia Island. Bookmark the permalink.
Loading Comments...
%d bloggers like this: