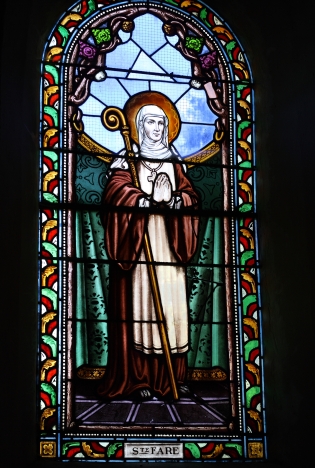 Celts to the Creche: Day 21

On this 21st day of our journey with the Celts to the Creche, we encounter St. Burgundofara (also known as St. Fara, Fare), the founding Abbess of Faremoutiers (originally called Evoriacum), east of Paris, near Euro Disney.

Her family: She was born at the villa of Pipimisiac, near Meaux, France. She was the daughter of Chagneric, an important official in the court of King Theudebert II and his wife Leudegund. Her siblings were: St. Chagnoald, who was a companion of St. Columbanus and a Bishop of Laon;  Faro who was the  Bishop of Meaux; a sister Agnetrude; and another brother Chagnulf  who was the Count of Meaux and was murdered in 641.

We know about Burgundofara through her will and the writing of Jonas of Bobbio who wrote the life of the Irish monk St. Columbanus (see day 11 of Celts to the Creche):

“Then Columban went to the city of Meaux. There he was received with great joy by a nobleman Hagneric (Chagneric, father of Burgundofara), who was a friend of Theudebert [King Theudebert II], a wise man, and a counsellor grateful to the king, and was fortified by nobility and wisdom. … Columban blessed his house and consecrated to the Lord his daughter Burgundofara, who was still a child, and of whom we shall speak later.” 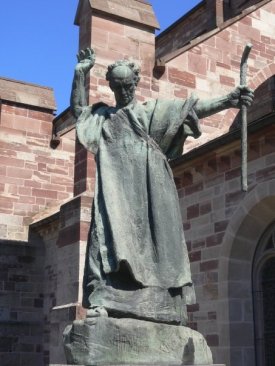 Statue of St. Columbanus at Luxeuil, one of the monasteries he founded in France

Columbanus’ dedicates her to God: Burgundofara’s childhood blessing and dedication to God by the Celtic Columbanus left such a deep  mark upon her soul that she resisted her parents’ attempts to force her to marry a few years later.

Probably through her brother Chagnoald, who was at that time a monk at Luxeuil (founded by Columbanus), she appealed to Eustachius, who was the abbot of Luxeuil.  He came to her personally and then brought her to Meaux, where she took the veil and was consecrated with the approval of Bishop Gundoald of Meaux.

Building Faremoutiers: Eustachius then assigned two monks to help her build a nunnery named Evoriacum (after her death the name was changed to Faremoutiers in her honor) on some of her father’s vast holding of lands between the Grand Morin and Alba Rivers. These monks were also to instruct this newly established community in the rules of religious life. A short while later, a second house for men was added for the monks and Burgundofara was then Abbess over this double monastery of men and women. Faremoutiers was probably the first double monastery in France. Even though it was in Merovingian France, it held closer to the Celtic way  since it used the Rule of St. Columbanus for the life of the monastery. 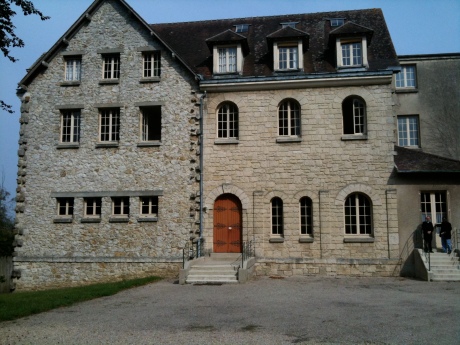 One of the buildings of Faremoutiers, France. I was there in September 2009. I tried to visit with the very kind current Abbess, but she only spoke French. I can read French fairly well, but do not speak it very well.

About 630 AD Bishop Faro of Meaux, the brother of Burgundofara asked one of the nuns of Faremoutiers named Theodechilde (see day  8 Celts to the Creche) to become the first Abbess of the newly formed Jouarre Monastery.

Tender and Tough: There is an interesting story of Abbess Burgundofara who “really gave it to” Agrestius, a former monk of Luxeuil who criticized the harshness of the Rule of St. Columbanus at Luxeuil at the Council of Macon in 626. His complaints were rejected by the Bishops at this Council. But, he was still determined that he was right, so, he promoted his modifications to the Rule of Columbanus at another convent. Agrestius then went to Burgundofara to try to insinuate that she was not a good Abbess for using the Rule of Columbanus at Faremoutiers and this is what Jonas of Bobbio records of this confrontation:

“Agrestius then made his way to Burgundofara to try if he might defile her with his insinuations. But the virgin of Christ confounded him, not in a feminine manner, but with a virile response: “Why have you come here, you confuter of truth, inventor of new tales, pouring out your honey-sweetened poison to change healthy food into deadly bitterness? You slander those whose virtues I have experienced. From them I received the doctrine of salvation. Their erudition has opened the way to the kingdom of Heaven for many. Recall the words of Isaiah: ‘Woe unto them that call evil good and good evil.’ Hurry and turn wholly away from this insanity.”

Burgundofara was known for not only her personal courage and strength, but also her care, counsel, and devotion for those at Faremoutiers. 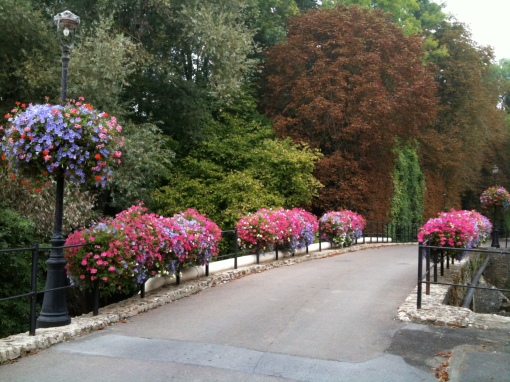 A most beautiful bridge in the village of Faremoutiers that was probably part of the original lands of the double monastery of Faremoutiers. I took this photo in September 2009. I think it looks like a bridge to heaven!

Anglo-Saxon Royalty at Faremoutiers: It is my belief that Queen Hereswith of East Anglia (see day 3 of Celts to the Creche),  the older sister of St. Hilda of Whitby (see day 2 of Celts to the Creche) was a nun at Faremoutiers, not Chelles as Bede states. Two other Anglo-Saxons also went to Faremoutiers and became the Abbesses after Burgundofara died: St. Saethryd and St. Æthelburga, the step-daughter and daughter of King Anna of East Anglia. These were likely nieces of St. Hereswith.  There seems to have been some significant connections between Merovingian France and East Anglia.

Place of Resurrection: According to her will (Testamentum) dated October 6, 633/4  Burgundofara left all her lands to Faremoutiers, except for a share in a villa of Louvres that she gave to her siblings in exchange for their agreement not to interfere with her bequest.  Burgundofara likely died at Faremoutiers after serving as Abbess for 37 years. Jonas wrote that Burgundofara had a fever and “died.” She came back to life after visiting the heavenlies and was told she had to make restitution with three nuns whom she had hurt. She received their forgiveness, lived six more months, and then prophesied of her date and  time of death. When she died, her body smelled of balsam. A solemn mass was held 30 days after her resurrection.  Her monastery is still in existence 1400 years later on the same piece of property.

Feast Day April 3,
but celebrated on December 7  in France

Just as St. Columbanus showed up at the home of Chagneric and Leudegund and prayed a blessing and prayer of dedication over the little girl Burgundofara that marked her life, one person can make an important and lasting impression on our own life. Our lives can be forever touched by  a person’s words or blessing.  Who has been that one in your life who has brought blessing, encouragement, or counsel that has effected your calling,  your life’s work, your personal ministry?

Prayer: Thank you God for people who are sent our way to bring us good counsel, recognize our gifts, and give us hope for the future. Amen.

Jonas of Bobbio. Life of Columbanus.

Pastor Brenda is an ordained Christian Church (Disciples of Christ) minister. I am married with two grown awesome sons; and an equally awesome daughter-in-love; and two Maine Coon cats named for Celtic saints: “St. Fursey” and the paternal line of St. Columba, “Nialls.” Nialls is a gorgeous, huge, charming re-homed cat and he arrived with the name Niles. My pets must have Celtic/Anglo-Saxon names and since he seemed past the age to change his name...it became “Nialls.” My son asked me how to pronounce the cat’s new name and I said, “Niles.” As a former public and theological Library Director, I love doing research that has helped me in composing this Advent devotional. My research has been enriched by libraries, way too many books and journals purchased, and numerous pilgrimages to the places where these saints lived and worked and had their being. I cannot even begin to express what a great gift it has been to meet like-minded friends along the path who have generously and kindly shared their scholarship, knowledge, and enthusiasm for the Celtic and Anglo-Saxon saints. I often wonder if the saints have in some way been instrumental in introducing me to their friends on both sides of the thin veil. "Celts to the Creche" at www.saintsbridge.org. is one of my blogs. I have written of some of my pilgrimages and random musings at pastorpilgrim.wordpress.org. Some of my recent sermons can be found on YouTube under First Christian Church (Disciples of Christ), San Angelo, Texas.
View all posts by Pastor Brenda →
This entry was posted in Uncategorized and tagged 40 Day Advent Devotional, 40 day Celtic Advent devotional, Abbess Fare, Aethelburga, Agnetrude, Anglo Saxon Saints, Bishop Chagnoald of Laon, Bishop Faro of Meaux, Brige Monastery, Burgundofara, Burgundofaro, Celtic Advent Devotional, Celtic Saints, Celts to the Creche, Chelles Abbey, Columbanus, Council of Macon, Eorcengota, Evoriacum, Fara, Faremoutiers, Jonas of Bobbio, Jouarre, Luxeuil, Merovingian saints, merovingians, Online Advent Devotional, Rule of Columbanus, Saethryth, sister of Burgundofara. Bookmark the permalink.